Julia started playing Table Tennis at 11 years old living in Chateauguay, Quebec. “We had a table at home. My father and sister both played. My father worked with a gentleman whose daughter at the time was top in Canada (Christine Forgo). This work colleague came over to our house and saw that my father and sister both played and saw potential in my sister. He introduced us to a tt club” says the former National Team Athlete. Her parents thought it was ideal, so the signed both her and her sister up to play at the school. After making the Quebec Team, they moved to Ontario and had no problem to make the Ontario Team as well.

Julia was the top junior in Canada for Under 13, Unter 15 and Under 17. She was selected to be at the National Training Centre in Ottawa and represented Canada at the Commonwealth Games in Bombay where they won the silver medal.

“I met my husband of 34 years playing Table Tennis! Stephane has won the senior men’s title a few years in a row.   He and I continue to play and have so much fun. We have both participated in the world veteren championships. I have made lifelong friends from having played competitive tt” says Julia.

And she started coaching 3.5 years ago. Mainly seniors. She has also run some Master Classes at the Ottawa Table Tennis Club. A fun fact “In my prime, I was known for my smash. People would ask me how I do it….I couldn’t explain it back then….I would tell them to watch me! I love the sport!”

Find out more about some of Julia’s adventures tonight at the live interview!!! 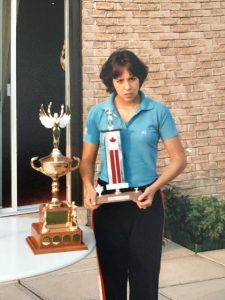 Canadian Women’s Team winning silver in Bombay. Julia is the 2nd from the left.

Ontario team. Julia is in the front row, second to the left. 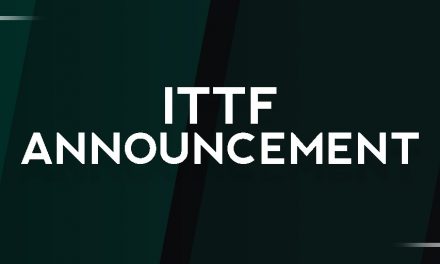 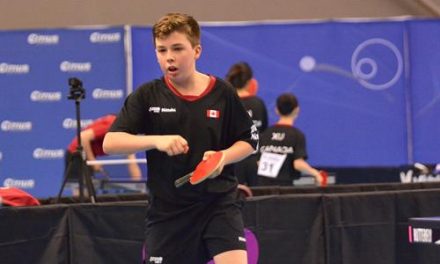