I left Vancouver, British Columbia November 27 on a long journey to Cape Town, South Africa via London with a connecting flight to Cape Town (arriving November 29 in the morning). I attended the umpires’ briefing at 8 PM that evening on November 29.

There were many surprises at this tournament. First, the tournament was held in the Grand West Casino. The venue was quite large in which 12 tables were set up for competition with two tables for television purposes. The balcony with almost 1000 seats was set up for viewing audiences. All players and officials had to be scanned in for security purposes as they entered the casino.  The casino was quite large combining a playground area for kids, food court and numerous restaurants. There were many children inside watching the competition at the tournament. It was a fantastic sight to see such enthusiasm and excitement.  The second surprise was the Chinese team – they only captured the girls single’s title in seven events. The big winner was Japan – they captured both boys’ and girls’ team titles and boy’s singles champion (by a 13-year-old boy named Harimoto). The Koreans won both boys’ doubles and mixed doubles and the girls’ doubles were taken by the Romanians.

Although, we did not have a day off officially – a few International Umpires and I managed to squeeze a tour of downtown Cape Town and a quick tour of the Cape of Good Hope.  Thanks to Table Tennis Canada URC for selecting me to attend this prestigious event and having an opportunity to explore a small part of South Africa. 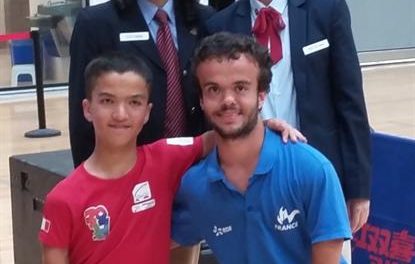